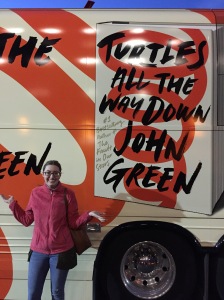 I saw John and Hank Green (for the second time!) when they stopped by my alma mater, Western Washington University, on John Green’s book tour for TURTLES ALL THE WAY DOWN. Which I haven’t actually read yet, because I’ve been reading library books and also things for class. But SOON.

Anyway, one thing to know about their tours – which they also did jointly for the release of TFiOS – is that it’s really a variety show. John talks about his book and reads from it, but then we also get Hank singing songs about science, and they do things together. This time, they answered pre-submitted questions in a sort of podcast format. (Which – it was news to me they have a podcast now? I’m out of the loop.)

The evening as a whole was really fun. They both do a great job getting the audience 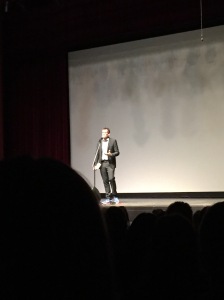 excited and involved, despite hating audience participation, according to John. Thinking about it, I guess there really wasn’t any audience participation involved. They just did a great job making it SEEM like we were participating, simply because they made sure we had fun. And I will say, while I felt a little weird being a lone adult attendee, it was cool seeing how many teenagers convinced their parents to take them, and how many of them were singing along with Hank’s science songs, and generally being excited about nerd stuff.

John also took some time to talk about his OCD, and how it made him less creative because not taking care of it made it harder for him to write, and he urged the audience to get help if they, like him, felt like their brains were spinning out of control and were feeling scared. Given how many people in the audience were teenagers, I’m glad he spoke about his experience so honestly, because a lot of those kids who were there really look up to him, so his words have the potential to have a really big impact on them.

One thought on “John & Hank Green: Turtles All the Way Down Tour”